Real Estate Web Creation works with agents and brokers all over North America, boosting organic traffic and lead volume in some of the most competitive markets in the U.S. and Canada. Based in Chicago, a number of my longest running clients are located right here in the Windy City but referrals have allowed our client base to expand each and every year since the beginning. While every website and every market poses unique challenges, here is a quick look at how our SEO and website development approach has helped create a better brand for just a few dedicated clients.

Helaine Cohen, founder of Chicago Condo Finder, has been a long-time client since early 2012. Back on August 10th of that year, her website recorded its first visitors ever, totaling 6 for the day. Steady optimization efforts and a strategic content development plan that still continues to this day now have her website at the top of search results and a web presence that is stronger than ever. A recent review of her website showed 535,755 visitors for the year with 55.4% of that traffic volume being new visitors and 44.6% returning visitors. Helaine’s organic lead volume has also steadily increased over the years, elevating her business to extraordinary levels.

Leo Clark with Gold Coast Realty has also been with Real Estate Web Creation since 2012, although back then work on his website was a little more sporadic. But after getting a better idea of what SEO entails, how competition factors into results, and getting a truer sense of how consistent work on his website could help elevate the Gold Coast Realty brand, it didn’t take long before part-time work evolved into an aggressive monthly investment. Going from minimal traffic back in 2012 and 2013 to now just under 10,000 weekly organic sessions on a fairly consistent basis during peak times of the year has been one of our biggest success stories. But we still have a long way to go and keep exploring innovative and creative ways to drive even more relevant traffic.

Nashville has one of the hottest housing markets in the country right now, so working on the Holt Real Estate Group website has been especially fun. When we first started work it was clear the website needed quite a bit of fine-tuning, both structurally and in terms of basic on-page SEO. The first order of business was getting many of the website’s existing pages re-tooled to better satisfy basic optimization guidelines, and more recently the focus has shifted towards steadily expanding the Holt Real Estate Group brand beyond the city of Nashville and into the surrounding suburbs. Over the years we’ve seen organic traffic and lead volume continue to climb and much of this success is due to an aggressive SEO and content development approach that we’re still implementing today.

After failing to see satisfactory results from another SEO company, John reached out to me back in 2015 after another Real Estate Web Creation client gave him my info. Frustrated with the lack of results, he was hesitant to spend even more money on website development and SEO but had also heard good things from other Real Estate Web Creation clients at the same time. With Calgary also being one of the most competitive markets as far as real estate SEO is concerned, it’s been an uphill battle from the start. Nevertheless, John has continued to stay patient and since beginning work on his website, he’s gone from just 49 weekly visitors back in the first week of April 2015 to just under 2,000 weekly visitors more recently. In addition, we’ve also seen his organic lead volume increase by over 800% during this same time frame and we’re still seeing continued growth each year and every year to date.

At first, Nick’s business was unique in that his team’s primary focus was on the robust apartment market throughout Downtown Chicago. Similar to Leo and Helaine, Nick has been a Real Estate Web Creation client dating all the way back to 2013, and an aggressive optimization strategy and a heavy emphasis on luxury apartment buildings throughout the city enabled his business to grow substantially thanks to steady increases in both organic traffic and organic lead volume. As you can see from the graph, however, the apartment market in Chicago is extremely seasonal, which encouraged us to expand his reach and begin focusing on both the ‘for sale’ side of the market as well as the market out in some of Chicago’s most sought-after suburbs. Not surprisingly, these efforts have fueled incredible growth and now Nick and his team among the highest producers at their brokerage. 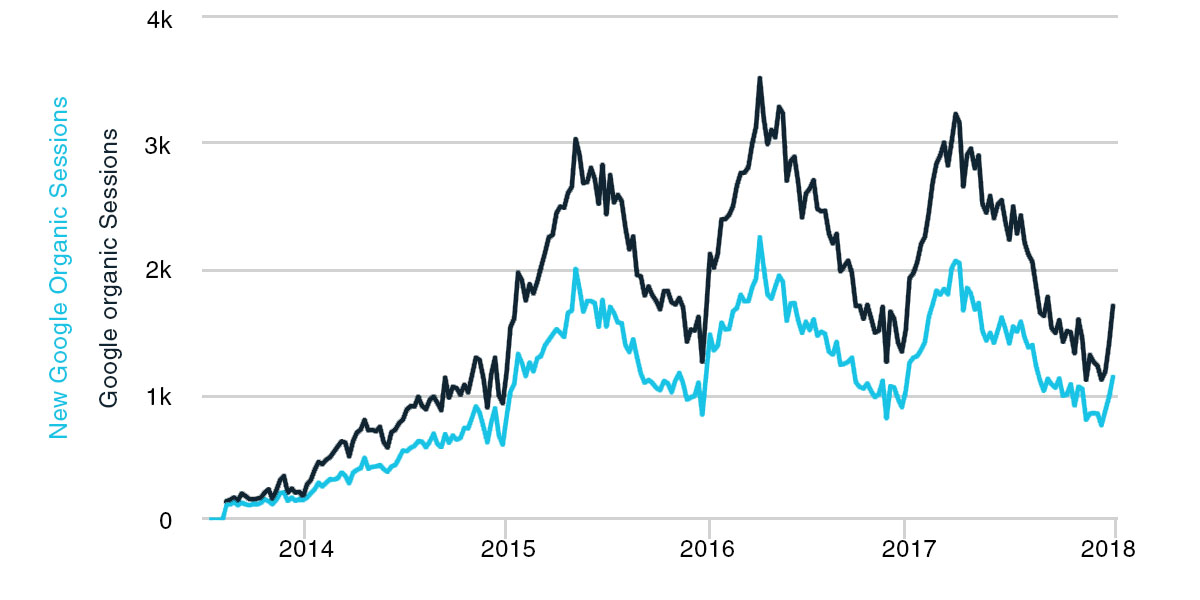 When I first started work on The Little Group’s website back in 2015 it was still very much in the early development stage and seeing very little organic traffic and leads. In fact, it wasn’t producing any organic leads whatsoever at that time. The first steps we took involved fine-tuning much of the website’s on-page SEO and re-working the entire site architecture. From there we began to target key areas of interest, leverage his website’s IDX data, and began rolling out a stronger content development strategy to help maximize visibility in search results and strengthen the website’s overall authority. After plenty of hard work and also a little patience we more than tripled his website’s weekly organic traffic volume and also started generating quality organic leads for many of the key areas in his market. 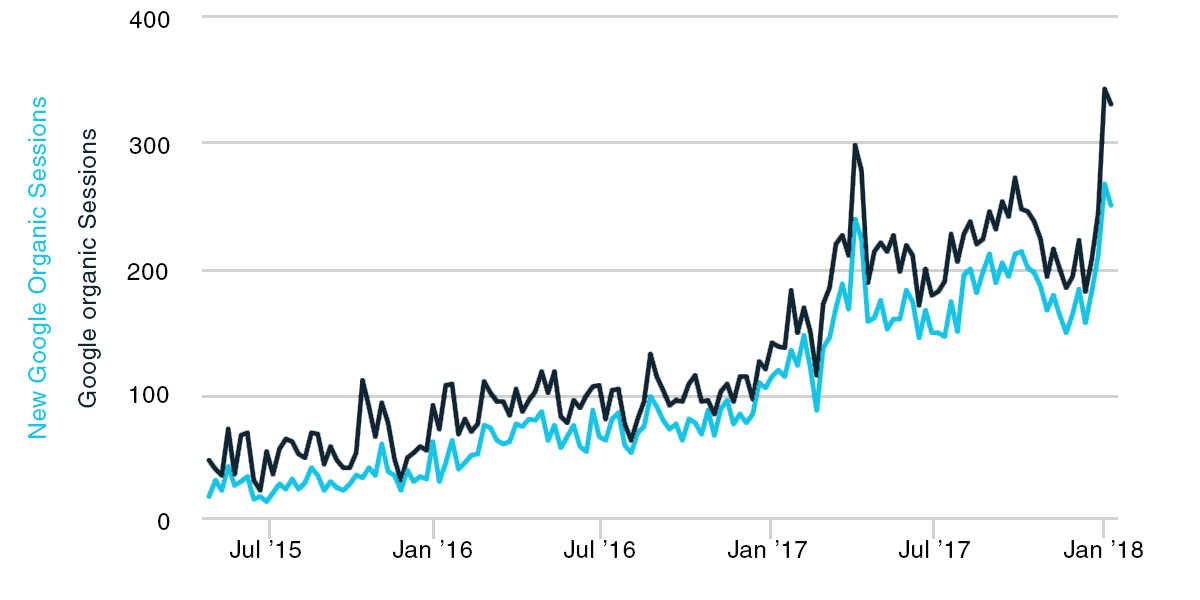 In terms of website development and SEO, Mike Grizzell of the Mike + Michelle Team really started to kick things up a notch back in the fall of 2017. Despite having the technical skills and ability to do what it takes to organically compete in search results, finding the time to develop a high-ranking website while also being top producers in the Tampa market proved to be daunting task. So I picked things up right around the time they launched a new website with Real Estate Webmasters, which at the time was seeing under 100 weekly organic users. Since then, we’ve seen steady gains in both organic leads and organic traffic while also nearing the 2,000 weekly organic users milestone.